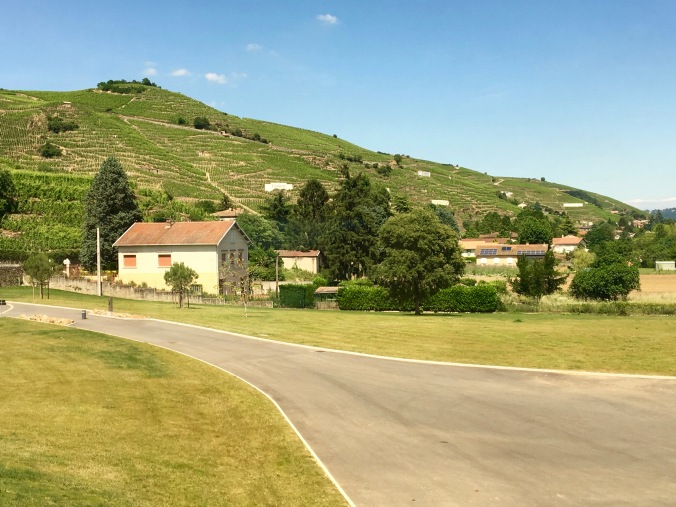 Somehow I didn’t take a picture of the winery so this photo looking towards the slopes of Côte-Rôtie will have to do.

Pulling into Stephane Ogier’s winery in Côte-Rôtie you immediately know that this tasting experience might be a little different. Very modern and austere, the winery feels a little like an outlier in the middle of all the old rustic stone buildings. Rather than a bell on a string you buzz a gate keypad and state your business. The gates open and you wind up a gravel road to a low angled glass and metal modern structure that almost looks like it’s part of the hill it was built on.

Stephane was off tasting in Portugal but we met with his “right hand man” Graeme Bott. Graeme’s a New Zealander and, after struggling through a few tastings in French, it was a relief to converse with someone completely fluent in English (I know, I need to learn French). 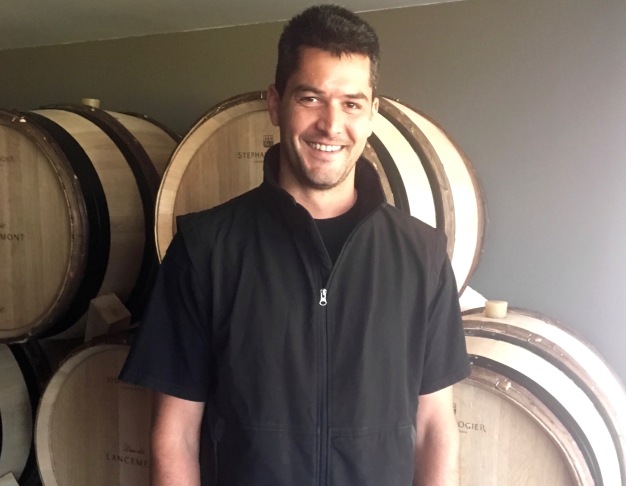 The barrel room is expansive and also modern, clean and bright, it’s more reminiscent of a larger California winery than anything we had seen up until this point in the Northern Rhone. We got started on the 2015’s in barrel and I couldn’t believe how open and finished these wines tasted. Graeme attributed this to the spectacular 2015 vintage which he puts right up there with 1990, 1999, and 2010. The wines had recently been racked which he felt made them more open and approachable even in barrel.

Graeme pulling barrel samples from the 2015 wines.
Stephane Ogier’s 2015 wines are defined by their balance, they aren’t on the lean side but they aren’t on the rich and full side either, they seem to walk the fine line between brawn and finesse. The 2014’s were a little more on the finesse side of things but didn’t lack for power.

Like many of the Northern Rhone wineries we encountered, Ogier seems to combine the best of the traditional wine-making techniques of the region with the best of the modern. He uses a little new oak and makes decisions about stem inclusion based on the vintage. Having studied in Burgundy, Ogier wants to make Syrahs of finesse and elegance. The Burgundian influence also shows in his philosophy of exploring distinct terroirs within the Côte-Rôtie appellation. They produce a Côte-Rôtie Village from younger vines, a Côte-Rôtie reserve, 6 single vineyard Côte-Rôties and two smaller parcel selections from within those single vineyards. Ogier also produces a wine called L’Ame Soeur which is from an as-yet unapproved Seysuel appellation on the other coast of the Rhone River.

Some highlights of what we tasted:

The 2015 wine made from the goblet-trained vines of Montmain was rich and full but with an incredible floral aroma. The Fongeant, Cote-Bodin, and La Vialliere were also showing very well out of barrel which Graeme believed had to do not only with the vintage but also with the fact that the barrels had been recently racked.

The 2014 vintage was a trickier vintage than 2015, marked by lots of rain but a dry end of the summer, the wines tend to be more reserved than the 2015’s. We were able to taste the 2014 St. Joseph, the Côte-Rôtie Village, the Côte-Rôtie Reserve and the Seysuel Syrah. All were delicious, elegant Syrahs with floral and savory character. The star of the tasting was a 2012 Belle Helene which is a parcel select wine that Ogier makes; it was savory and umami, no sense of vegetal with an irresistible salted plum character.

It was a pleasure to meet Graeme and his lovely wife Julie (who helped us with dinner reservations at the bistro of the famed La Pyramide) at Stephane Ogier’s winery. I got the sense that, in the sea of modernity that is the Ogier winery, there is still a winemaker that respects the traditions of the Côte-Rôtie by celebrating the elegant, feminine side of Syrah.